THE OFFSHORE LIFE IN ANY WATERS

If you’ve fished in Baja, you’re no stranger to the East Cape. But that doesn’t make it any less appealing. We recently caught up with Pete Giacalone of Kusler Yachts in San Diego. He’s been lucky enough to make this trip almost every year since he was 16… sometimes even twice a year!

Pete is one of those guys who enjoys Baja’s East Cape not only for its wide variety of inshore and offshore game fish, but also for the culture – not to mention the rugged-yet-beautiful landscape.

“It’s laid back, the fishing is incredible, and you can’t beat the weather. The best time to go is Fall and Spring – when it isn’t too hot,” says Pete. “And those worried about crowds on the water shouldn’t think twice… the offshore area is so vast that you likely won’t run into anyone.”

In the Fall, Pete heads offshore for the prized blue marlin, dorado, and wahoo, among others. In the Spring, he’ll fish for yellowfin tuna, striped marlin, and grouper.

“For offshore fishing, you’ll be anywhere from 3 to 20 miles off the coast. We use Shimano Tiagra 50 reels spooled with 100-pound spectra and a 100-yard top shot of 80-100-pound monofilament for some stretch in the line. I’ll put that on a Calstar 660XXH rod. I like a varied spread of lures, and I’m partial towards using custom Hawaiian lure heads. I skirt them myself. I’ll have a couple of Marauders out for wahoo as well.” 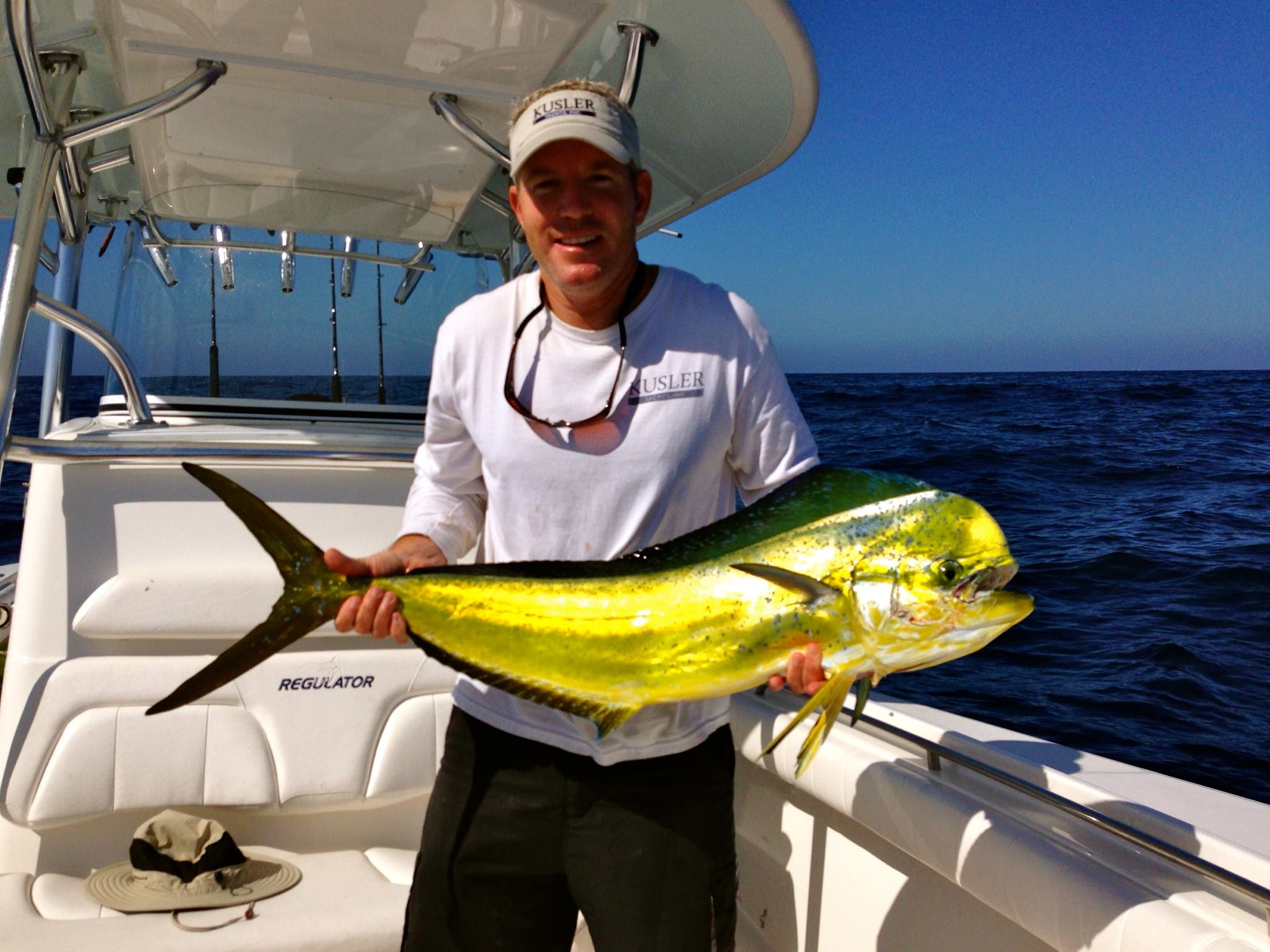 Closer to shore, sierra (or ladyfish), roosterfish, and pargo are abundant.

“For nearshore fishing, I like to use Shimano Talica 10 reels spooled with 65-pound spectra and a short topshot of 40-pound fluorocarbon leader. I put that on a Calstar Grafighter 700H rod. With that we will troll live mackerel or caballitos for roosterfish, pargo, or dorado, and use a 6/0 owner hook. I’ll use that same setup for live baiting striped marlin, too.

“For casting topwater plugs to roosterfish, I use a Shimano Stella 14000 spooled with 80-pound spectra and a 3-foot leader of 60-pound fluorocarbon. I’ll put that on a Shimano Terez 78XH rod. I’ll use GT ice cream cone lures, custom topwater plugs, or large Hawaiian poppers. I’ll also use that same setup for fishing grouper and yellowtail with Shimano flat fall jigs.”

WHERE TO STAY & PLAY

Since there’s no shortage of fishing opportunities, you’ll want to plan on a minimum of four days. Getting there is easy. You can fly into either La Paz or Cabo San Lucas, depending on the resort you choose. Pete recommended his two favorites – which he picks based on the type of trip he’s going on that year. Whichever you opt for, it’s easy to schedule a shuttle from the airports to the resorts. Or, you can rent a car if you’d rather be more independent.

Just a little over an hour from both Cabo San Lucas and La Paz airports, you’ll find the remote Rancho Leonero Resort. The best place to stay in the East Cape, according to Travel + Leisure, Rancho Leonero is low-key and focused on providing its guests with the perfect pad for hardcore fishing trips. Initially a getaway destination for mid-twentieth century Hollywood “bad boys” (think John Wayne and Errol Flynn), Rancho Leonero has since developed into an acclaimed resort – all while staying true to its original feel. The marina at La Ribera is only a 20-minute drive away, making it the ideal place to dock your boat.

“We recently did a father/son customer trip and stayed at Rancho Leonero,” says Pete. “We fished their Regulator 28, which they dock in Baja year-round. It was such a fun time – especially because I got to witness his son catch his very first marlin!” 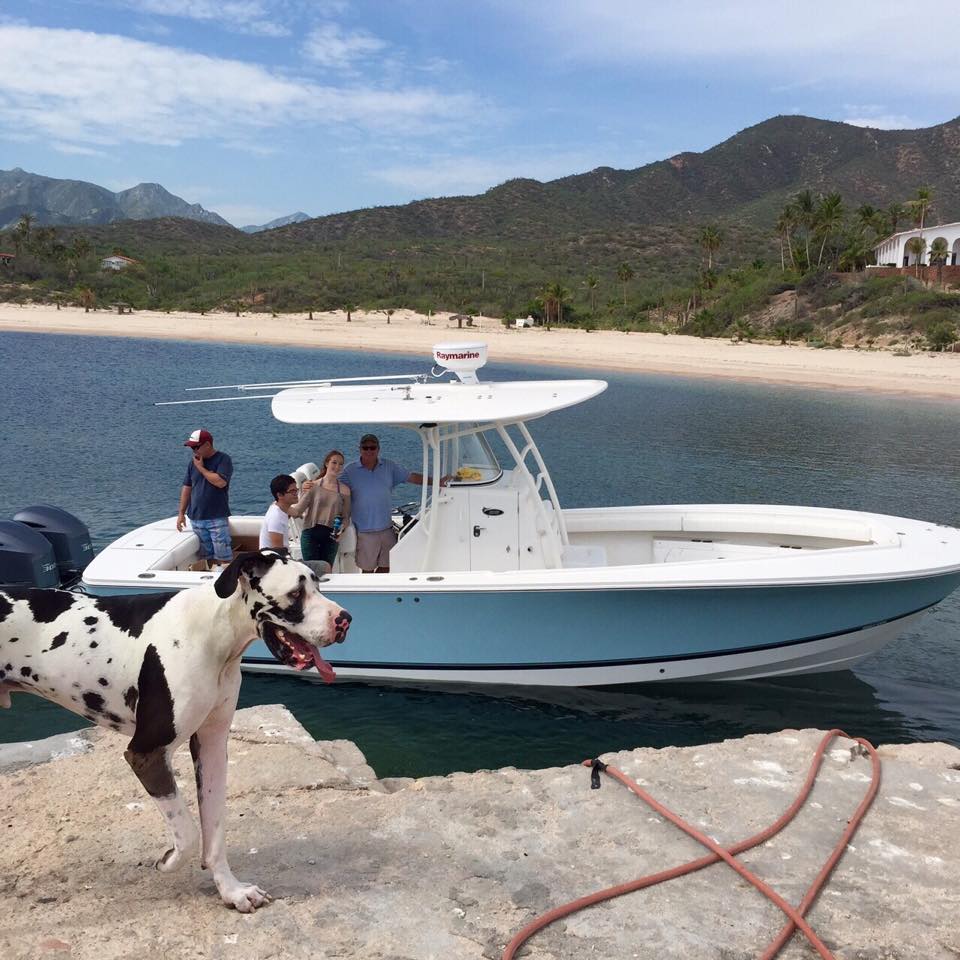 About an hour away from La Paz is Hotel Rancho Las Cruces, a magnificent resort that has its own share of noteworthy history. Once a playground for Hollywood personalities like Desi Arnaz, Bing Crosby, and Lucille Bremer – founder Abelardo L. Rodriguez Montijo’s wife – Rancho Las Cruces boasts incredible views onto the Sea of Cortez and provides first class accommodations. In addition to being an outlet for sport fishing, the hotel is ideal for a family getaway: you’ll find tennis courts, luxurious pools, and other amenities.

“Both offer excellent accommodations and the meals are fantastic,” says Pete. “By ‘meals’, I’m really talking about our catch of the day. We always bring something back to the kitchen. We’ll give the chefs tuna, mahi mahi, rooster, and they will prepare delicious dishes ranging from ceviche to fish tacos. They’ll prepare each fish 3 or 4 different ways!”

But it’s not all about the fishing. If you’re looking to expand your trip, or spend some time exploring the area via land and water, the East Cape has you covered. Snorkel and dive among over 800 species of marine life in the Sea of Cortez, nicknamed "the world's aquarium" by the famed oceanographer Jacques Cousteau. You can also opt for kayaking, stand-up paddle boarding, ATV tours, kite boarding, golf, hiking, horseback riding – or relax in your resort’s spa!

“The East Cape is very versatile in that way,” says Pete. “No matter when and where you go, you’ll catch amazing fish and it’s always a lot of fun!”

BACK TO ALL POSTS
Previous Article
Next Article